In the midst of this election season, I am disheartened by all the misunderstanding, oversimplification, and confusion our televised debates are causing. At age 92, I have had a ringside seat to observe every presidential election since 1948 when Harry Truman opposed Thomas Dewey and Strom Thurmond, and it seems like this campaign cycle is the most rancorous of all. Today, voters are understandably fearful about our future because of the wide sweep of opinions. It’s high time we ratchet down the rhetoric and appreciate just how much prosperity, freedom, and enjoyment of life we’ve had in the last half century.

My childhood was spent on the streets of New York City, and the reality of the Great Depression was a daily factor for my family. I saw my neighbors struggling to survive, to put food on the table and to give their children hope. Before I was eligible to vote, the United States was attacked at Pearl Harbor in December of 1941. I soon enlisted in the Army Air Corps, and I am grateful for the training and the discipline I learned as a young man. These lessons allowed me to persevere through 27 dangerous missions over Japan. I was a navigator and radar bombardier with the rank of captain at my discharge. Later, I experienced much of what our current veterans are going through, having seen so many of my buddies get killed. It was difficult to rid myself of “survivor’s guilt.”

One benefit of my military experience was learning how to work with a team and rely on others for support. Another upside was realizing again and again the advantages of a disciplined focus when executing plans. After the war there were great opportunities for education with the G.I. Bill of Rights, but I could not wait to become an entrepreneur, to own a business, and to create new products, jobs, and services. I started with a tiny company in Los Angeles that always carried the aura of a proud family enterprise. Since then, I have made deals and operated many companies throughout the United States and around the world.

As I frequently say these days, my great ambition now is to pass on my recommendations to the newest generation of entrepreneurs, to help guide them toward a rewarding career and a feeling of independence. The opportunities in America today still remain far greater than anywhere else.

Unfortunately, few of the presidential candidates are addressing an underlying fact of our economy. The middle class has been declining steadily in numbers and in standard of living. The American Dream is founded on a strong middle class, yet the recent debates are concentrating on the culture wars, foreign policy failings, religious liberty, and healthcare issues. Candidates should give higher priority to the kinds of avenues and opportunities that build up our middle class, including entrepreneurship.

When the subject of our military’s role is debated, I sometimes feel like we are in the middle of the repetitive Groundhog Day cycle. On the right, the Republicans are telling us how much tougher they would be than their Democratic opponents, using phrases like “We will carpet bomb them!” that draw big rounds of applause. While they say they are going to be cutting taxes and reducing government expenses, it is a given that building an even bigger military machine would be part of the plan. On the left, the Democrats are not as aggressive but do believe in coalitions of air support and large numbers of “advisors” on the ground. Tragically, the fact that these soldiers are called advisors does not limit their exposure to the hazards of war.

Essentially, these are the same debates we’ve been having since the Vietnam War. In the last 50 years, trillions of dollars have been spent and tens of thousands of American soldiers have died. We can all agree that America’s armed forces are the finest in the world, but we must also acknowledge that in all of our conflicts, none of the expected results have been gained. And we must not overlook the plight of surviving veterans. They and we are paying a terrible social and physical cost. The transition to civilian life can seem so difficult and overwhelming that many veterans see suicide as their only solution.

One clear way to guide their civilian transition toward more positive outcomes, both personally and professionally, is by supporting new opportunities to move into business ownership or into roles of business leadership. This would more fully utilize the useful skill-sets, experiences and training our military personnel receive. Military training instills valuable attitudes and team building skills that can be directly applied to starting and sustaining a business or leading from the ranks of management, and with a continual stream of veterans re-entering the workforce, we owe it to them to help foster strength and confidence as best we can. John Panaccione of VettoCEO.org — a fellow veteran entrepreneur thought leader — explains this in more detail in a Forbes magazine interview: “Three Reasons Veterans Make Great Entrepreneurs.” Another advocate toward expanding resources and better equipping our military members with available programs is Barbara Carson, Associate Administrator to the Office of Veterans Business Development (OVBD) for the Small Business Administration, whose office also aims to empower Veteran entrepreneurship. There are now countless veterans like us, who continue to encourage and develop educational materials and programs geared toward leveraging the very talents they’ve been trained to acquire, channeling their commitment into worthwhile endeavors.

The Preamble to the U.S. Constitution commits our government to “provide for the common defence” and I think it is time we redefine what “common defence” means in the 21st century. Should it include enforcing our will on sovereign nations where religious sects have been fighting each other for a thousand years? The recently proposed Pentagon budget for fiscal year 2017 totals $610 billion, and I suggest we rethink its priorities. Let’s reallocate some of this budget to domestic areas, which will make us stronger and safer. Our country’s infrastructure, its bridges and pipelines, its highways and railways, its public water facilities and so much more, are dangerously outdated. In the private sector, businesses that defer maintenance are just asking for trouble, and this is exactly the position our country finds itself in. For example, we invented the Internet in the 1960s, yet our connection speed today ranks 17th in the world. Just think what a boost this change would give to our nation’s economy and our entrepreneurs. Suddenly, we would create countless new opportunities for entrepreneurs, strengthen the security of our infrastructure, and dramatically broaden the middle class.

During the ensuing debates, I would like just one moderator to ask, “What are the American interests we are protecting and how does our foreign intervention stop enemies from attacking our vulnerabilities at home?” And, “What will you do to better support returning veterans and their opportunities after they return?” Then, I would like to hear follow-up questions that force candidates to get away from their overly prepared and scripted points. I think this would result in more thoughtful dialogue and help us elect the candidate who would really serve the best interests of our country.

My great fortune was to be born in the United States with unlimited opportunity. Nothing would please me more than to see our nation regain its footing as the world’s undeniable leader of prosperity and peace. As I’ve highlighted before in a previous article, entrepreneurship has a ripple effect, including bringing more resolve to our economy and individuals, as well as promoting peace through greater personal and community prosperity.

It’s still a long way to the November elections. In the meantime, I would ask my fellow Americans to pose the right questions that can put us on the road to a growing middle class, a more rational defense budget, and improved and sustainable living conditions for all. 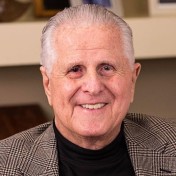